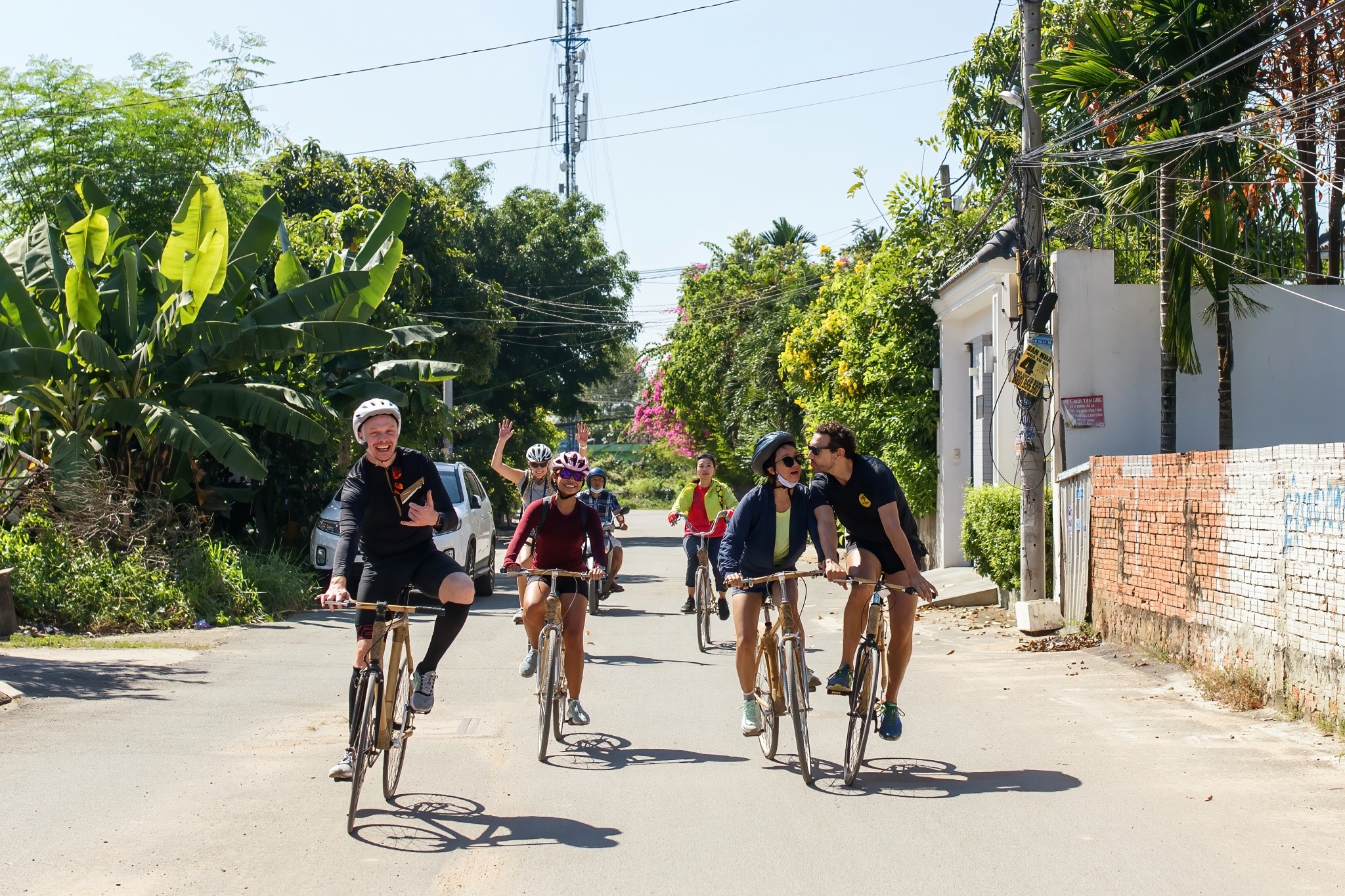 As unlikely as it might sound, Vietnam’s first handmade bamboo bicycles begin its life at Mekong Quilts, a social enterprise formed by its sister non-profit organisation Mekong Plus to create sustainable fabric work for under-privileged female artisans.

“We started with quilts and expanded into handicrafts such as papier-mâché souvenirs and water hyacinth bags,” Bernard Kervyn, founding director of Mekong Quilts explained.

One of Mekong Quilts bamboo bicycle

A new resolve was sparked when Bernard heard about bamboo bikes made in the US on the BBC. He immediately thought Mekong Quilts should try something similar since strong bamboo grows abundantly in the region⁠.

The tensile strength of bamboo combined with the motivation to keep several households of rural Vietnamese employed led to 20 failed prototypes before the birth of Mekong Quilts’ celebrated line of manual and battery-powered bamboo bicycles.

“From adventure ‘fatbikes’ to standard commuter and kid’s kick bikes, there is a bamboo bicycle at Mekong Quilts for everyone [in the family]!” Bernard declared.

In 2012, Mekong Plus began organising bamboo bike tours in Vietnam and Cambodia. The aim was straightforward—participants would enjoy the natural suspension provided by bamboo two wheels while discovering rural regions where Mekong Plus’ and Mekong Quilts’ beneficiaries reside.

Today these adventures bring locals and tourists to at least four regions in Vietnam and Cambodia. A US$50 donation from participants goes on to fund community projects and scholarship programmes helmed by Mekong Plus.

Bamboo bicycles are being fine tuned before the excursion

Trips to Vietnam’s Ninh Thuận province bring bamboo bicycle cyclists to the picturesque coastal countryside where much of the country’s Cham ethnic community continue to reside. Despite being relatively dry and arid, the distinctively pronounced tropical savanna climate of the region makes the cultivation of rare Vietnamese produce such as wine grapes possible.

For those that prefer exploring the lengthy distributaries of the Mekong River, a weekend of cycling from hamlet to hamlet in Long Mỹ town in Vietnam’s southwestern Hậu Giang province offers a glimpse into Mekong Quilts’ quilt, papier-mâché, and water hyacinth bag workshops.

Fibres of the Water hyacinth, an invasive aquatic pestilence clogs that water channels of raft-faring Indochinese locals and suffocate fish, is first dried carefully before being sorted based on length to make beautiful beige-toned rattan. The meticulous process, involving at least 72 hours of work, ends with nimble-handed ladies interlacing the fibres into bags and pouches.

Beyond handicraft, cyclists who visit the delta region will also witness the agronomic ingenuity born from collaboration between locals and Mekong Plus’ partner non-government organisation Ánh Dương centre. From farming mushrooms using past-crop hay and Anguillid ‘paddy’ eels consumed with zeal by city-dwellers, many community projects in this region are witty compromises between the lack of arable land and accessibility.

Eels being raised by a family in the Mekong Delta

Pace and itinerary suitable for all participants

Having hosted at least 1000 cyclists over the last decade, Mekong Plus understands that different groups desire different outcomes, distances, and experiences during the tours.

For many international and local companies that desire a memorable team-building activity, more than 40 bamboo bicycles are available to take participants on an often-unique itinerary—even a trans-Cambodia tour to Angkor Wat that departs from Vietnam is possible.

“Our youngest [pillion] participant was a 6-month-old newborn, [and the] oldest being 75 [years old]!” Bernard divulged.

For non-sporting participants, the bamboo bicycle tours combine several casual legs of 15 to 20 kilometres of cycling with local food at local homes, hammock nap cafes, temples, and informal visits to community projects designed by Mekong Plus.

How you can join bamboo bicycle tours and help Mekong Plus

For interested individuals who reside in Ho Chi Minh City, regular tours from Mekong Quilts’ bicycle workshop in Thủ Đức city bring cyclists to An Phú Đông, one of Saigon’s last remaining green sanctuaries, for a morning of casual cycling and weekend socialising.

As of the writing of this blog article (January 2023), the Mekong Plus team is awaiting the arrival of a volunteer who is riding a bicycle from Paris to Hanoi. Currently still on route, he is scheduled to arrive in Vietnam in late-February 2023!

Every contribution to Mekong Plus when you participate in a bicycle tour is a gift of hope to Mekong Plus’ beneficiaries⁠—keeping children in school and keeping skillful artisans employed.

Mekong Plus strives to save both people and the environment

Cycling for a cause with Mekong Plus