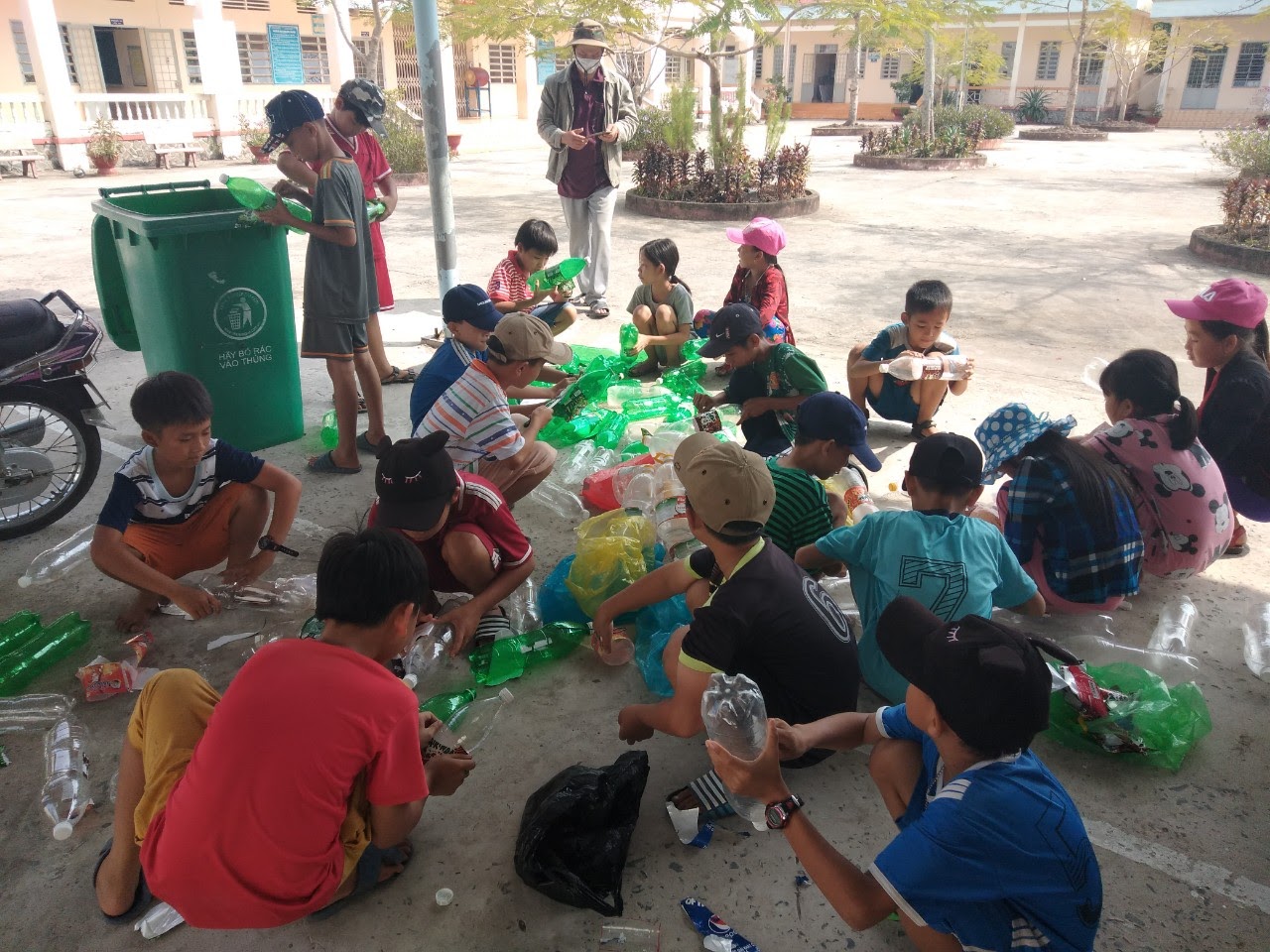 Since the earliest days, Mekong Plus and its founder Bernard Kervyn have been deeply devoted to changing the lives of underprivileged locals and their families in Vietnam through initiatives such as micro-credits, sustainable livestock farming and scholarship programmes to keep as many children in school as possible.

Through its close involvement with schools in the region and with encouragement from EARTHDAY.ORG, Mekong Plus began organising excursions for students to collect plastic waste in the villages on a regular basis. Most of the waste plastic is then weighed and sold to local collectors.

“This went fine for a while, but [then] we realised the value kept dropping,” Bernard explained.

It was an issue beyond the control of Locals. “What if [one day] Vietnam can no longer export its plastic waste?” Bernard queried.

With the worrying habit of locals dumping plastic waste into rivers out of shortsightedness, Bernard and his team began searching for alternative solutions that would be welcomed by locals.

At first, Mekong Plus attempted to emulate efforts pioneered in the Southern Indian state of Tamil Nadu where refuse plastic is mixed with bitumen to create roads that are durable and resistant to degradation and formation of potholes during the monsoon season.

“It was a brilliant idea… until we realised that the cost was 50% more expensive than regular roads here,” Bernard said in disappointment.

Then, motivated by reports of success in Latin America, Mekong Plus began researching methods of making bricks from a mixture of cement and plastic.

“[But] after some simulations the bricks turned out to be 30% more expensive than traditional bricks!” Bernard related.

A revelation came when Mekong Plus realised that something could be done to complement traditional bricks that remained the most cost-friendly option for construction. Using a combination of plastic waste and tetra packs discarded from beverage and milk packaging, panels that can substitute brick walls and iron roofs could be made at a 20% reduction in total costs.

“Cost savings are important because we target the poor,” Bernard elaborated. “Our housing programme for the poorest in the [Mekong] Delta subsidises VND10,000,000 for each family. We increase this value to VND15,000,000 if they are willing to use the panels.”

With more and more locals following suit, he believes the effort will gain traction as people become enlightened about the benefits that go beyond just saving the environment. Beyond recycling almost 1 ton of plastic waste for a small house of approximately 30m2, the interior of homes made with recycled panels enjoy average room temperatures that are 2 – 3°C cooler.

Fuel from plastic not a pipe dream

Just like many developing countries, haphazard incineration of plastic waste is illegal yet commonplace. Not all burning is equal though, as Bernard and team soon realized. Through pyrolysis, or combustion without oxygen, plastic waste can be converted into fossil fuel such as diesel, petrol, and natural gas, just like how charcoal is created from wood.

Beyond working with a French company to produce large-scale machinery to make this dream a possibility in the Mekong Delta, Mekong Plus contacted NuFuels, a New Zealand based company that focuses on small-scale pyrolysis devices suitable for remote communities, specifically pacific islanders suffering from constant energy issues.

“The technique is small-scale, between 20 – 50 kilograms [of waste]. We have reached an agreement with them and local authorities [in Vietnam] have approved the design in principle,” Bernard emphasised, optimistically.

Another advantage of pyrolysis systems is the ability to utilise many types of plastic waste. According to experts, pyrolysis should ideally produce 95% fuel and gas, with a maximum efficiency dependent on a number of factors including the capacity of the system.

“We hope the fuel can be used to power motorcycles and generate electricity for schools,” Bernard remarked. With the Ho Chi Minh City University (HUTECH) expressing interest and support as well, the team is hopeful about the plan.

Departing from projects of a grander scale, Mekong Plus is also seeking simpler solutions such as recycling plastic into furniture.

“As an economist doing social work, I believe it has to be financially viable,” Bernard interjected while quoting examples of how some tests are demanding prices up to 2 times that of wooden furniture for plastic-made alternatives.

To make this possible, Ánh Dương Centre & Mekong Plus have begun a technical collaboration with ReForm Plastic Project by providing plastic waste on a regular basis. Helmed by Jan Zellmann of Evergreen Labs, a creative business lab that focuses on designing sustainable business solutions, the project was started in 2017 with a mission of producing environmentally-friendly and commercially viable furniture.

ReForm, a solution to plastic waste in South East Asia

Mekong Plus is open to ideas

Ultimately, Mekong Plus believes in sustainability above profit. Bernard emphasises that many solution providers are afraid of intellectual property issues that may arise in third world countries.

“It is difficult to work with people that want their ideas hidden. We are happy for others to study our ideas too,” he insists.

If you have any suggestions to how the problem of increasing amounting plastic waste can be eliminated in the Mekong Delta, please feel free to contact Mekong Plus at bernard.kervyn@mekongplus.org.

Mekong Plus nurturing both farmers and the environment