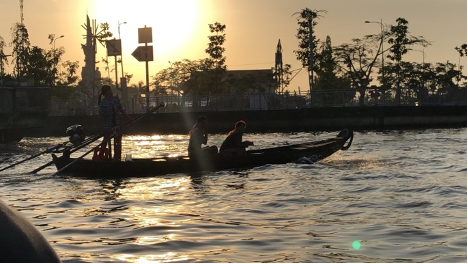 Deeply motivated by French agronomist René Dumont, whose book illustrated vivid scenes of poverty in India, Bernard left for Bangladesh to join an NGO for a stint that lasted more than a decade. He then brought the valuable experience gained in South Asia to Vietnam with his wife to start Vietnam Plus. It has since been renamed Mekong Plus to reflect its commitments to both Vietnam and Cambodia that share the geographical Mekong region.

“When we started [the organisation] in 1994, there was no culture of social work and hardly anyone with experience in the field,” Bernard revealed.

In the earlier days of the project, It was common for city-dwellers to join the team and be ‘shell shocked’ by life in the rural areas and leaving for the big city within days. Soon after Bernard’s first inaugural social work trip to the then impoverished coastal province of Bình Thuận, old colleagues and friends from various NGOs he worked with decided to lend a hand financially which leapfrogged Mekong Plus’ earliest efforts.

A lady cleaning her dishes by the river in a rural village of Mekong Delta.

A myriad of strategies developed over two decades